That was Me, I thought, as I watched My Week with Marilyn 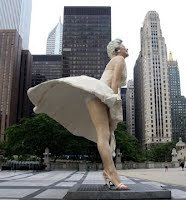 As I watched the movie My Week With Marilyn, at one scene my mouth dropped open and I said, “That was me.” It’s where Marilyn realizes she’s destroyed her personal and professional life and is having an emotional breakdown  leaning against a wall crying.

That was me in a bathroom of a Houston oil company office building downtown in 1981. One month earlier, I had been a NASA Public Affairs Officer, working in the LBJ Space Center newsroom. I was even training to do Mission Commentary for Spacelab One. Now instead I was out of a job with a need to pay rent, so I’d gone to work as a temp in a downtown oil company. One afternoon, realizing my sexual compulsion had ruined so much in my life, I deconstructed, and spent hours in the ladies room acting exactly like Marilyn in the scene from the 2011 movie that struck me so hard, I had to capture a screen shot.

The summer that Marilyn Monroe’s body was found in her Beverly Hills apartment, I was only 13 years old, yet when I heard the news, it registered with me so intensely, I walked up the beach that day in a daze, crying.

I was only 13 years old, how did I even know who and what Marilyn Monroe was? But I did, I felt an affinity with her. Even before I reached puberty, I recognized in Marilyn Monroe the same damaged thing I knew was inside myself, it was coming from her eyes.


Back in the little studio apartment where I lived with my sister, I made Trish wake up. “I just heard something horrible on the news,” I said, “Marilyn Monroe is dead.”

“What are you doing? Why did you wake me up to tell me that?” she answered, rolled over, and went back to sleep.

Trish did not get it. I thought she would get it.

Because my sister and I had this weird connection that had something to do with sex, and we realized later in life was probably because we were both molested in the same way by Father Thomas Barry Horne in Bartlett in the 1950s.  In 1962 somehow I just knew Marilyn Monroe had the same weird thing, so Trish should be just as anguished at Marilyn’s death as I was.

Patricia is the only other person I know of, so far, that was molested by Father Thomas Barry Horne of Bartlett Illinois, both of us as preschoolers. Patricia is the sister with whom my whole life I shared this weird sameness, yet the two of us were very different from every other person on Earth.

We knew we shared something that made us sexually unusual, we just really didn't know what why or how.

For instance, Patricia held onto her virginity with confirmed passion all the way until she was age twenty-one.

Me, by age twenty-one, I’d had sex with more than a hundred men and had quit counting.

***************
Summer 1962 was yet another summer I was sent to stay with my sister, who, I learned later in life, had been molested as a child by the same priest who got to me at age five. That summer I realized whatever made my sister and me the same, also made us very different. And For some reason my dad sent me to stay with my sister Patricia every summer, until I graduated high school, when I was sent to live with her where she had moved in Europe.

Why did my dad send me to spend every summer with Patricia?

That 1962 summer morning, somewhere along the carnival area near the Balboa pier, I heard the news, that Marilyn Monroe had been found dead, and it struck me, stunned me. In almost a daze I stumbled up the beachfront sidewalk back to our little apartment out on the peninsula near The Wedge.

The incidents with Father Horne when we were pre-school aged children lived in the tension between my sister and me our entire lives.

Watch the screenshot of the scene from My Week with Marilyn here http://cityofangels15.blogspot.com/2012/04/marilyn-and-me.html