,
Dialogue from Episode One:

“My story is so outrageous, people don’t believe it.”
“I have the same experience.”
.
Posted by Kay Ebeling at 12:23 PM No comments: Links to this post

From Here On Out

I am just going to sit here where I've landed and write two books, next two years.  Sit here with this window in front of me and a train to Chicago blocks away, and write fiction based on all the stories, posted and not posted, at CofA Blog since 2007.

I've got one half finished already, so stay close by.
.
Kay E
.
Posted by Kay Ebeling at 8:40 AM No comments: Links to this post

I FOUND IT:   The post about trashing the bathroom at St. Perpetua Church in San Marino  CA.  First posted January 2007 at Cityof Angels One titled: “Teenage years add-on” but last few weeks I keep editing it and editing it*,   At some point you have to just let go and publish.  In an upcoming fiction piece is a female character with same backstory as me named Cass.

It must have been 1961 as I was thirteen years old.

Usually my dad was on business trips and my atheist mom would let me and my sister skip Mass.

Now my dad had a job in downtown L.A.  No more ditching church.

My mom dropped me off and watched until I got in the door.  But as soon as she pulled away, I was out the side door and around the back of the church where I knew there was a girls rest room in the elementary school playground area.

In this concrete space in the back of the church property it was quiet and felt safely remote.  Now I could finally come to a stop after a day of playing four square in the neighborhood like a ravaging maniac, going faster than the speed of life all that day, running away from the curious confusing swirl of emotions that had started up as the rest of the family left for church that morning,


I avoided Mass that morning when the family car pulled away but my dad's glare was rigid: “You'll go at five o'clock then.”

Sure, a lot of kids don't want to go to church on Sundays, but the revulsion I felt was so much deeper than my friends’ dislike of church.  At age thirteen, I’d long ago stuffed away memories of Father Horne and his invasive fingers in me at age five.  I just knew there was something I did not like about the Catholic Church and I didn't want to participate anymore.

Now in that cold gray girls restroom with no one around I stopped long enough to feel the emotion that had been churning in me that day, a mixture of revulsion and rage.

It started as I looked at myself, a tube of lipstick in my hand.  Maybe my first intent was just to put some lipstick on, maybe I was still planning to go back into the church.  But soon instead of on my lips, the red waxy tube of color became my paint.  On the mirror I wrote the words “Hypocrites, Catholics are Hypocrites.”  I got so much satisfaction from the red markings smashing into the mirror surface, that I continued writing

"Hypocrites, Catholics Are All Hypocrites"

all over the rest of the mirror and then on the wall next to the mirror, until the lipstick was ground flat.

Now the rage had emerged and I needed something else.  I was making gurgling noises that occasionally grew to a growling scream.  The people inside Mass must have been able to hear me but I was no longer aware of where I was.  My rage was unbounded and I wanted to destroy more, get louder, get more outrageous.

On the wall was a towel dispenser from the 1960s where you pulled and more clean towel would unroll and the used towel rolls back into the dispenser.  I pulled and pulled and pulled until I had extended the white cloth all over the bathroom, then twisted the cloth, dipped it in the water running in the sink, dragged the white cloth on the floor, stomping as much dirt from my shoes onto it as I could.  I tried to pull the cloth into a toilet stall but it would not reach that far, a fact that made me more enraged.

My screeching noises became more shrill, I pulled and pulled at the towel and became tangled up with it where I’d fallen on the floor, my gyrating so out of control I couldn't stop twisting myself up.  I couldn't pull the towel any farther so the rage was building up and I was looking around for something else, some other thing I could jerk myself over to and destroy.

Then the light in the room changed.

Because a nun, in full black habit and veil stood in the doorway.  The restroom faced west so the setting sun formed a silhouette, the nun was a black form in the doorway, with the smog of an L.A. summer afternoon bright gray behind her.

I stopped.  A rush of completeness and serenity washed over me and I stopped pulling on the towel dispenser, untangles myself.  I couldn't see the nun’s face, just her eerie presence.

I don't really remember what happened after that. 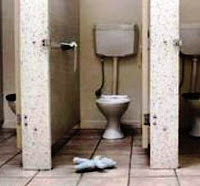 Except it was soon after that incident that my dad told me and my older sister Patricia, you know what, I will give you a choice.  He said, you are old enough and mature enough to decide for yourselves if you want to go to Mass on Sunday, if you don't want to go, you don't have to go.

My dad, the wonderful progressive futuristic thinking guy that I always thought that he was.

I didn't realize until 1994 my dad knew what Father Horne had done to me and my sister when we were preschool aged, apparently.  So ten years later when I trashed the girls bathroom at the church, he was beginning to see the effects those criminal fingers had on his two daughters.

I did act out from the time I was about age six in ways that showed I’d been molested, it's just up to the early 1960s, people didn't know what it meant when a little girl is always climbing up on the men in the room and bouncing on their laps.

I had textbook behavior of a molested child.  I took an overdose of vitamins when I was around nine, the overeating that started at age seven or so was astonishing, and I was obese all the way up to becoming preteen and going into puberty when I realized I’d need to be thin to be attractive and get the sex I now wanted.  So then I had anorexia starting in 1962 before anyone even knew what anorexia was,

I took my cousins into a room and sexualized them under the covers when I was maybe seven, while our parents were drinking and celebrating in the other room.

In today’s world with those signals, child abuse professionals would have converged on my parents to find out who was molesting me by the time I was about six.

But no, my karma was to have the experience of being sexualized at age six by a Catholic priest and then be thrown aroused out into the world with all its repercussions.

then edited and developed as part of the story at City of Angels 15 in October 2012, finally published in November..

The City of Angels is everywhere especially

And now I'm finished writing my own story and ready to take this to a different level.

Posted by Kay Ebeling
cooling down in Illinois
.
* I might not even have the right church.  It might have been a different church... oh well. It was somewhere in San Gabriel Valley 1961.
.
Posted by Kay Ebeling at 8:16 AM 1 comment: Links to this post